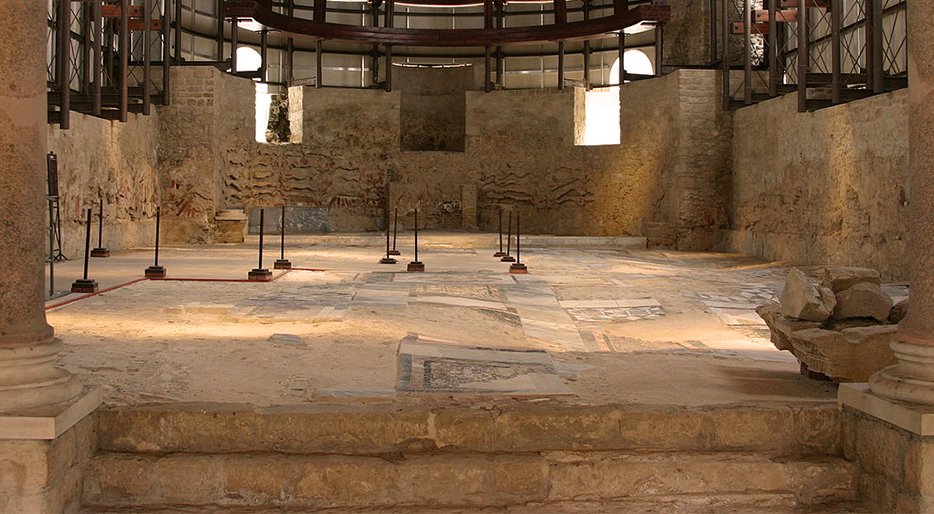 The Villa, a UNESCO World Heritage site from 1997, is one of the most important evidence of Roman master's residence because it's sophisticated and beautiful. It was discovered in 1950, the splendid architecture dates approximately from the first half of IV century but dating of estate is still unclear.

Due to its majesty experts first thought  it was committed by Emperor but lately, after  discovering  other related villas in Sicily, they tought it could be a private property and the owner was probably an aristocrat, a Roman senator maybe or a Roman governor.

The structure is organized on four constitutive nuclei. Access to the Villa is by step through a monumental entrance leading to an atrium with porch and fountain from wich one goes to the thermal baths and to the quadrangular peristyle on the left. Peristyle is a large garden with porch and with rooms  around it. Going down the Peristyle and then walking through the Great Hunt corridor, you'll get the basilica. From quadrangular perystile one goes to the upper level where are the ovoid peristyle and the triapsidal hall.

We're speaking about an area of around 3.500 mq paved with splendid mosaics fully preserved, created by african artists, experts say, showing scenes drawn from Omero's literary work, from Greek mythology and from daily life. Villa's mosaics aren't just beautiful but also historical record of certain aspects of Roman culture like beasts hunting for circus and coliseum games. The main example is the Great Hunt mosaic in the corridor, which extend to 70 meters and can de read as a large map of Roman empire symbolized by fauna and by natural enviroments of empire's regions.

Outside the Villa were discovered two acqueducts aimed to water supply. According to experts, the Villa wasn't isolated but sorrounded by several minor constructions.

Free for minors. For other free cases, consult the website

Free admission on the first Sunday of the month.

The Villa Romana del Casale is located about 5 km from the city of Piazza Armerina, from which it can be reached by taxi service and from 1 May to 30 September - only on weekdays - with a municipal shuttle bus: Linea Villabus.