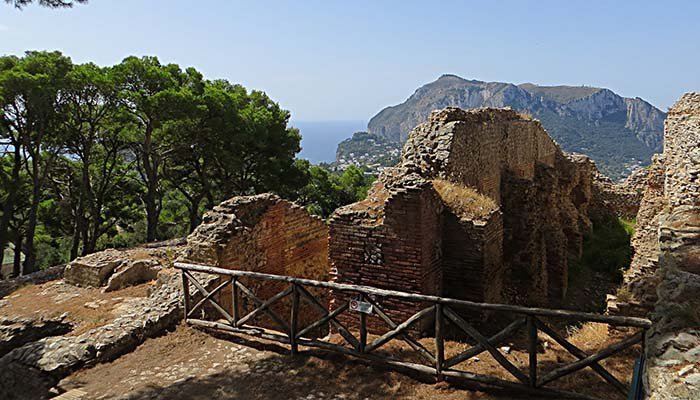 The splendid and majestic Villa Jovis, imperial villa of Tiberius, is elevated on the top of the eastern peak of Capri, and it is characterized by its peculiar architectural structure, surrounded by Mediterranean vegetation and there is a stunning view of the Gulf of Naples, Ischia, Procida, and Sorrentine peninsula.

Tiberius chose a splendid place for the construction of one of its several villas in which he spent his time.

The second emperor of Rome was reserved and didn’t love the frenetic life in Rome. Tacitus and Suetonius tell us about its preference for Capri and most of all for villa Jovis in which he spent the last part of his life and ruled the empire from the island.

The position was perfect for otium and isolation, but the emperor didn’t renounce comfort and luxury and we can intuit this from the huge dimension of the remains and the presence of baths.

The villa was built in the I century AD., probably the construction works started under August’s reign and completed under Tiberius.

It was discovered in XVIII century, but during the first excavations, without a systematic organization, some of the remains went lost. In 1932 the archaeologist Mauri oversaw the restoration and revaluation works of the villa, that lead to the current appearance.

At the end of a long walk uphill until the top of mount Tiberius, named after the emperor that chose it as the place of residence, the second-highest peak of Capri, you can find an amazing view of Ischia, Procida, Sorrentine Peninsula, and part of the Gulf of Naples.

This wonderful scenario surrounds the majestic remains of the Villa Jovis, and the opulence of the palace is intuitable just from the ruins, even if many decorations have been taken away and some of them are visible at the archaeological museum of Naples.

The villa has a very peculiar architecture due to its majestic dimension and the position on the top of the mount overlooking the sea.

The building is a structure on three levels and the visit is an exploration through cuniculi, staircases, and paths surrounded by maritime pines. You enter from a solemn entrance, a tetrastyle atrium, preceded by a vestibule. It is well preserved, with some arches, and varied decoration in the disposition of the bricks, and marbles.

Then you can proceed along a narrow corridor that leads to the servant’s quarter and the kitchen. In this area, there are smaller rooms with narrow windows. There is a staircase that leads to the central part of the building where you can see water tanks and the baths, which are proof of the ability of roman architects and engineers capable to organize a complex water system on the top of the mountain.

The tanks are positioned over a terrace from which you can have a top view of the servant’s quarters. The baths had fine decorations; the caldarium has two apses. The baths were particularly appreciated by the emperor that used to spend there a lot of time also because of health problems, and the importance of this area is proved also by the fact that the villa is also known by the name of Tiberius’ baths.

Emperor Tiberius was also very interested in astronomy and Trasillus, the faithful astrologist of the court used to live in this palace, where there was also a lighthouse that was used not only to check the sea but also as a point of observation of the sky.

Unfortunately, it is impossible to see the lighthouse because it was destroyed by an earthquake, but we know its original position, over the top of the peak. Here you can also see a church built in the XVII century dedicated to Santa Maria del Soccorso.

The highest part of the palace is also the biggest one and it was dedicated to the personal quarters of the emperor. Here the rooms are wider, and the view is spectacular. The peculiarity of this area is the main room with a semi-circular perimeter.

Immagini Copyright: By Mister No, CC BY 3.0

You may also be interested in the other archaeological sites in Campania.

How to get to Villa Jovis

Once you reach Capri, take the funicular from port Marina Grande to Piazza Umberto I, the proceed by foot. You can get to the villa in 50 minutes’ walk.

To see near Villa Jovis 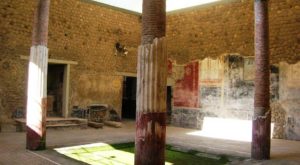 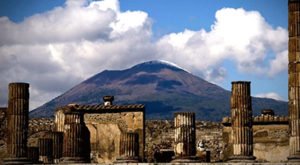