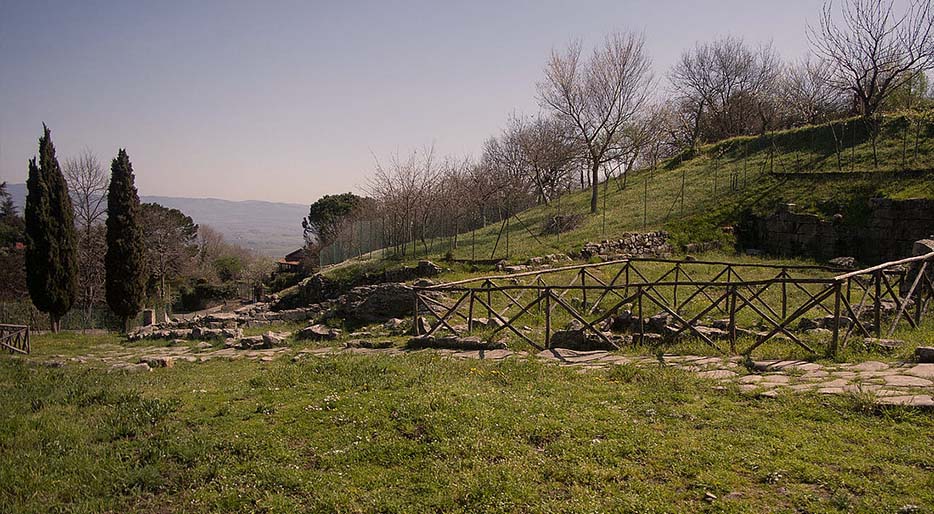 Ancient Vetulonia, an important Etruscan city, is characterized in particular because it is a rich and wide necropolis of this civilization, with monumental tombs from different historical periods, that today are disposed in a natural landscape, surrounded by olive trees and Mediterranean forest

The history of Vetulonia begins in Iron Age, when it was one of the settlement of the Villanovan Culture, the most ancient phase of the Etruscan civilization, and from this epoch today are preserved some evidences, in particular related to the funeral uses.

Then the development of the Etruscan Civilization brought importance to Vetulonia, that became a bigger, organized and fortified city. It became important in the Etruscan economic system, because it had commercial exchange with important centers like Populonia and Roselle, but with this last one it had a difficult and competitive relationship. In the end Roselle was advantaged in trades because of its position in front of the sea, while, Vetulonia was damaged because it was located in an inner region.

Between VII and V century B.C. the city reached its greatest heights, proved by the archeological remains, and then it was affected by a crisis and its importance decreased from III century B.C. when it became part of the roman hegemony, and became a municipium even if at first the city maintained its independence and coin.

The main particularity of the archaeological site of Vetulonia is that its history is visible especially through the evidences related to the death.

The most important archaeological remains are tombs from different periods and they permit to see the different historical phases of the site. The most ancient is the one of the Villanovan Culture, datable around the VIII century B.C. and there are two kind of sepulchers, the first one are tombs excavated as shafts in the rock and they are associated with incineration, and the latest one are excavated in the ground and hosted buried bodies.

This second kind of tombs were regrouped in circles (closed or interrupted) made of stones, and had very rich funeral trousseaus, as result of influence of the oriental culture on the Etruscan society, that started in the late VIII century and included uses and precious artifacts imported from the middle east. Particularly there were relevant evidences from two groups of tombs “circolo dei lebeti” that had bronze jars with fine decoration, and “circolo del tridente” named after a monumental trident found inside it.

The monumental tholos tombs that you can see now in the site were built in VII century B.C. and they are positioned long the “via dei sepolcri”: Belvedere’s tomb, Pietrera’s tomb and Diavolono’s tomb II.

The first one is not well preserved, there is only the architrave from the original squared structure covered by a pseudo cupola, a short dromos that lead to the sepulchral chamber and some niches that hosted other sepulchers.

The second grave is particular because it is a building that host inside it two tombs, one built on the other one. The oldest one had a circular sepulchral chamber but the construction collapsed in the latest year of VII century, when the second one was built, and the architects used the oldest as a base for the new building. It has a squared sepulchral chamber and it was covered by a pseudo cupola that today is lost, but it is visible the pillar that sustained the coverage.

The third tomb is called “Diavolino II” because “Diavolino I” was completely disassembled and moved to the archaeological museum of Florence where is now visible, reassembled. The structure is similar to the other two monumental sepulchers but there is a part of the coverage that is preserved.

We remind you that beside the remains visible in the archaeological area not far from the inhabited town, it is possible to see in the center of it, part of the ancient Etruscan walls, incorporated into the ones built in the middle Ages, and well preserved.

Wintertime (from October to March):

Summertime (from April to September):

From Tuesday to Sunday in this hours:

(in July and August is open also on Mondays)

See also the other archaeological sites of Tuscany. 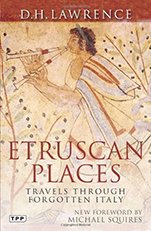 How to get to Vetulonia

By car: From Grosseto, leave the city in direction north west and take the SP “del Padule” for 7 km until the crossroad with SP Macchiascandona. Proceed on this road for 10 km in direction location “Scala Santa” were are the excavations of Vetulonia

By bus: from Grosseto railway station it is possible to take a bus 44C in direction Caldana 10, until the stop “Vetulonia scavi” that is in front of the excavations (around 35 minutes from Grosseto). In alternative it is possible to take, also from the station, another bus 10G in direction Grilli that stops in “Vetulnia scavi”, and the it takes around 1 hour to get there.

The Civic archaeological museum Isidoro Falchi is just 10 minutes away from the archaeological site by foot, cross Località Scala Santa, and proceed on via G. Garibaldi, till your destination in Piazza Vatluna.

If you are passionate about the Etruscan necropolis see also: 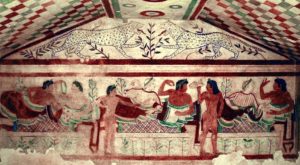 Etruscan necropolis of Banditaccia in Tarquinia>>