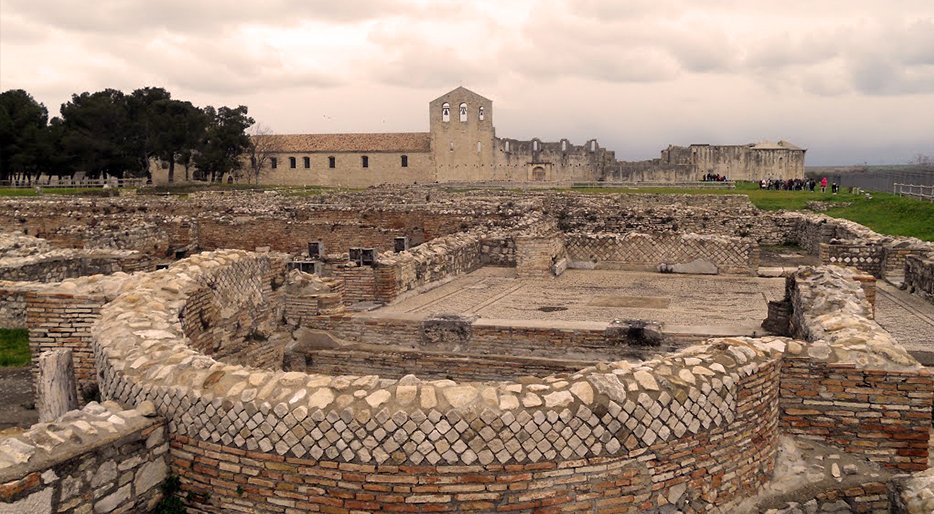 Venosa is considered one of the most beautiful burghs in Italy, and it is set on the hills in Basilicata, and it preserves splendid monuments of its past, so that it feels like being surrounded by a medieval atmosphere.  Before this epoch, Venosa was already the important city from which comes the Latin poet Horace, and it has a long story to tell about the times in which was a roman colony, and places to discover.

Venosa was founded in 291 B.C. by the Romans that conquered the zone, after having definitively submitted the Samnites. The name of the city can be associated to the goddess Venus, because the Romans dedicated the colony to her.

The city then was deducted and reorganized again because of the distribution of the arable lands, in 200 B.C. and in 43 B.C. to accommodate the new colons and the veterans of the triumviri. The inhabitants of Venosa took part in the Social War and then were recognized the roman citizen in 89 B.C. Also during the I century B.C. the city give birth to the poet Horace.

Venosa developed itself between the II century B.C. and the II century A.D. This is because at first the city was advantaged in trades because of the construction of the Via Appia, that connected Rome to Brindisi, but then it was built another street the via Traiana (wanted by the Emperor Trajan) that passed near to Venosa but excluded the city, that was damaged in its business.

Then the city began to decade, like many other centers in the Roman Empire until its fall, and Venosa changed its dimension and urban asset according to the medieval standards.

It is interesting to notice than in late antiquity, from the IV century A.D. there was an important Jewish community in Venosa, and this presence is proved by epigraphs and the catacombs near the hill of Magdalena: it is an hypogeum complex that was used for sepulchral reasons, that is extremely interesting because it has many inscriptions in Greek, Latin and  Jewish alphabet that report the history of this community and its integration in the social and administrative roman system, as well as the particular funeral uses.

The ancient roman city of Venosa

Venosa is rich of testimonies of its ancient history, besides the prehistorical site, there is an important archeological area of the Romans that is found in location S. Rocco.

The most interesting remains in the archaeological park are certainly the baths and the amphitheater, as well there are also many evidences of private domus.

The baths are composed by different rooms, and in particular it is visible in the tepidarium that there are preserved some small pillars in bricks and in the frigidarium pavements  with mosaics with geometric patterns or that portray aquatic animals.

The amphitheater was built in Julio-Claudian age, it hosted 10 000 spectators, and had an elliptic shape. It is preserved part of the perimeter and the walls in opus mixtus and opus reticulatus styles.

Here it is possible to see the gradual passage from the roman age to the middle Ages that is showed in a concrete shape by the abbey of the Holy Trinity which is a building with different layers of construction that belong to different ages.

The structure that you can see is double because it includes two churches from the age of the Normans. The first one is called the ancient church and was built in Romanic style, it has a perimeter like a basilica with three aisles, and in one of them it is visible a part of the pavement of the previous construction, a paleo Christian basilica built in VI century, that was also constructed on an ancient pagan temple dedicate to the god Hymenaeus. Under this level, there have been found pavements with mosaic that belonged to a private domus of the imperial age.

Next to this church there is another building, very suggestive, known as the incomplete church. Its construction started in XIII century, but was left unfinished because of the lack of funds. Today it visible exactly the same as when the works have been interrupted. The perimeter is visible with all the walls erected, there is a Latin cross floor plan with apse, there are inside two arches and five Corinthian columns and one of the main pillars. There is also part of the façade and of the baptistery that were realized before the construction was abandoned.

The ticket includes the entrance to the museum.

How you get to Venosa

You can get to Venosa from the north by different routes according to the starting point of your trip. If you come from north east, you can take the motorway Adriatica A14 and exit to Foggia, and take the S.S. 655 Bradanica, Foggia - Matera, and exit in Venosa sud.

From north west, you can take the motorway del Sole A1 and exit to Caserta, then take the A16 Napoli - Canosa and exit to  Candela, then proceed at the same way on the S.S. 655 Foggia - Matera, and exit in Venosa sud.

From south it is possible to take the motorway Salerno - Reggio Calabria, exit in Sicignano and turn in direction of the junction Sicignano – Potenza,  take S.S. 658 Potenza – Melfi, until the exit Barile-Ginestra-Venosa.