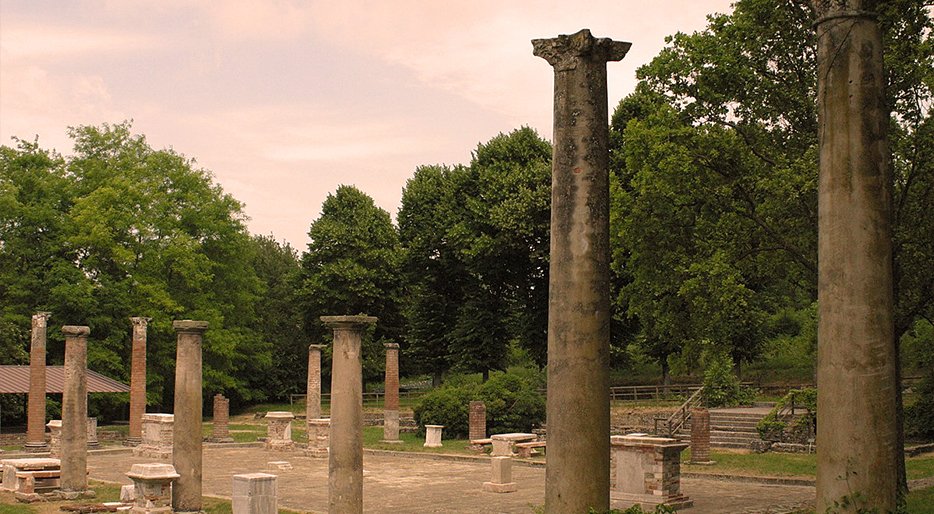 Roman Veleia is one of the main archaeological site in Emilia Romagna and one of the major ancient Roman site in the north of Italy. The city was a flourishing Roman town. The area has been inhabited since Iron age, then Romans snatched it from Ligurian people who has settled there.

Veleia rose behind the colony of Piacenza in the river Chero valley but it fell into ruins around the V century AD, maybe because of a sudden collapse of the mountains above covering the whole city in a while or because of the continuous rock sliding that forced out inhabitants to give up the land little by little.

Ancient Veleia was rediscovered in the XVII century. Excavation works started with the finding of Tabula Alimentaria Traianea, the largest inscribed bronze tablet ever survived from ancient Roman world to modern times. It contains a law to grant a soft loan with low interests to which farmers who would support children in need.

The residential district was spread on terraces where it's still possible to see the various building stages. But the economic and civilian real development occurred in the Augustan age.

Thermal Baths are southeast of Foro and it's the first building you'll meet visiting the site. Indeed the city was a public place because of the thermal springs. It's still possible to admire rooms of calidarium and tepidarium and the rectangular pool of frigidarium.

Private houses district rose West. It consisted of a number of houses with a peristyle, among which "Boar's house" is the best preserved.

Within Foro you can see the paved square, the basilica with a rectangular layout, porches and tabernas.

In the center of the square can be found the inscription written in the stone ground in honor of Lucius Lucilious Priscus and a stone of rose limestone devoted to Augustus. Right inside the basilica were found 12 statues of Julius-Claudian imperial family, now collected in the National Archaeological Museum of Parma as well as the precious Tabula.

Not so far from Forum there's an elliptic structure of uncertain feature. It's believed it could be the civic amphitheatre or a water storage tank.

In the 1975 it was built the Antiquarium, a place where it’s possible to admire the molds of Tabula and of  Lex de Gallia Cisalpina as well. There’s also a large number of remains and historic information boards to live the ancient Veleia experience.

Closing on December the 25th and January the 1st.

Free entry for all under 18s, journalists, some categories of students and teachers, the researchers and teachers of the European University Institute of Florence.

How to get to Veleia

It’s possible to get Piacenza by train and then take suburban line E42 (company: Seta spa).

Take motorway A1, exit gate Fiorenzuola. Keep driving towards Carpaneto and then Veleia.

The area is furnished with routes aimed to blind people and wheelchair users. On July of every year there is “Festival del Teatro Antico” staging ancient comedies and tragedies in the Foro area.