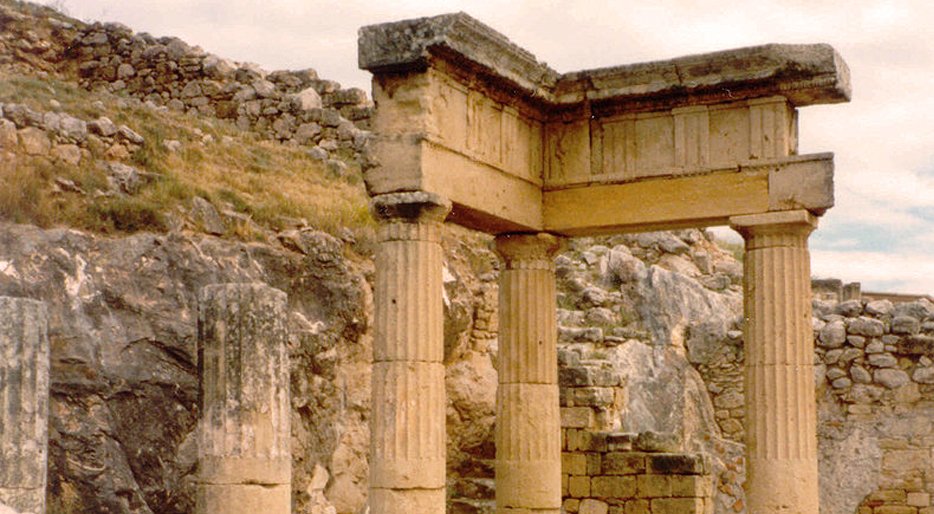 Soluntum is an ancient Greek city laying on Monte Catalfano in front of Capo Zafferano, in the neighborhood of Palermo. According to Tucidides, it was one of the major Phoenician cities in Sicily. Unfortunately, there are only a few of traces of the Punic settlement The remains of the Greek city are clearly visible.

The oldest news about Solunto we have from Tucidede, according to which this stretch of promontory would have been occupied by the Phoenicians at the time of the first Greek colonization. The city was conquered by Dionysus I of Syracuse during the war against the Carthaginians and probably the town was sacked and destroyed.

The city was then completely rebuilt on Mount Catalfano and here a group of Greek mercenaries settled. Important is indeed the presence of a Hellenic core in the city, recognizable by the decorations, the buildings and the presence of inscriptions in Greek.

The city passes under Roman rule in 254 BC. during the First Punic War. You know archaeological findings tend to think that the center of Solunto was already in decline in the first century AD. and that it was abandoned completely a little later.

The archaeological area of Soluntum

Although the city of Soluntum is indicated by Thucydides as one of the main Phoenician cities, the Punic area on the Solanto promontory still has few traces because of the fast growing of the modern town.

Near the railway station of Santa Flavia there's a necropolis with chamber tomb burials. Then we have an industrial district with ovens, a tophet and a hypogea tomb with dromos near the location of Odlivella. A large number of potteries were also found in Soluntum and among these even a kantharos made of bucchero and some amphoras with diffent shapes handmade by Punic craftsmen.

The remains of the Greek city are still visible. Itinerary runs across the regular urban plan made by ancient Greeks. Secondary streets branch out in several directions from both sides of the main paved road that run across the whole area ending at the agorà and the public area. These streets are laid out regularly around rectangular blocks settled on terraces at diffent levels in order to follow the natural gaps. Houses had an interesting design. They had many levels and home environments were concentrated around peristyles (pillared porches). The House of Leda deserves a focus on its wideness and floors made of opus signinum and mosaic. Next to the agorà there are some cisterns used for public waters. Thermal baths with mosaic floors are right in the front. From the square, visitors can get straight to the theater, decorated with caryatids and built to host up to 1.200 people.

Finally, we suggest to take a tour of Antiquarium. Here's collected the main part of the relics. In the ward A are displayed items about the town planning and the public and private architecture. In the ward B can be seen all the records from the latest excavations and the different building materials they used from the Punic up to the Roman Empire periods.

Ticket Office closes one hour before the closing time.

How to get to Soluntum

Nearest railway station is Palermo Centrale. You can take regional train service from here to Santa Flavia. Archaeological stie is about two Km from the station.

Coming from Palermo: follow road E90 to the exit Casteldaccia, then take SS113 in the direction of SP56 and then keep driving until you get Santa Flavia.

Coming from Messina: follow motorway A20 to the exit Altavilla Milicia, then take SS113 in the direction of SP56 and then keep driving until you get Santa Flavia.

Coming from Catania: follow motorway A19 to the exit Casteldaccia, then take SS113 in the direction of SP56 and then keep driving until you get Santa Flavia.