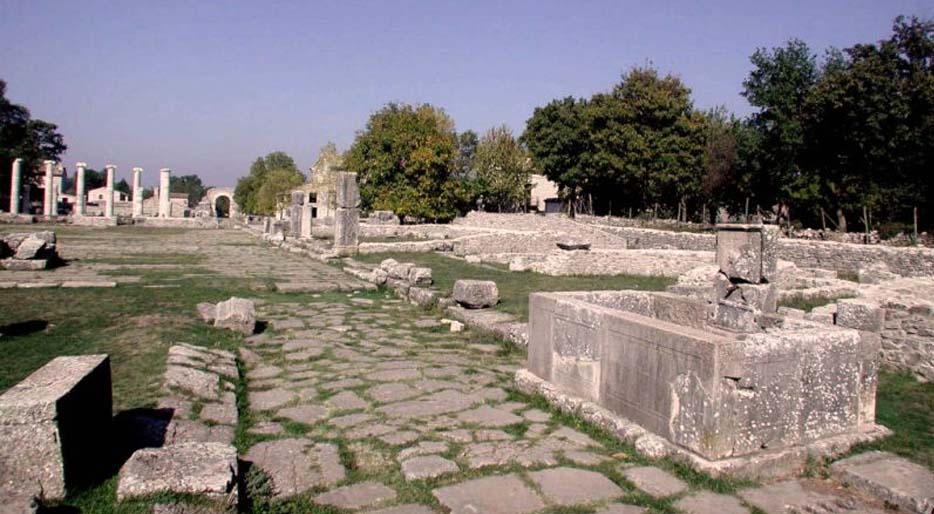 Saepinum was a Roman town which lies on the plain facing towards the Tammaro valley. It was named allegedly after the Latin verb saepire, which means "to fence in" due to the ancient walled sheepfolds used in the area over transhumance activity.

A fortified settlement rised earlier, on the mountain of Terravecchia. It was taken by Romans in BC 293, during Third Samnite War, and it caused the departure of residents who moved to the valley.

First urban planning of Saepinum dates from the II century BC and in Augustan age the city is at its peak. Town grows up and continues to flourish until IV-V century AD when it begins its decay, probably due to a hearthquake and a severe economic crisis.

The archaeological park of Saepinum

Ruins of the town are still showing the division into cardii and decumanii with the usual four gates in alignement with the main roads, three of them maintaining the original archway.

Forum is rectangular shaped, with flooring made of marble slabs and ruins of public buildings on the side, such as curiae, capitolinum and roman basilica displaying 20 Ionic columns, with plain shaft, that once enclosed a peristyle. Behind the basilca there's Roman macellum (indoor market) and before Porta Boiano, down the street on the right, there are ruins of one of the three thermal baths.

Some facilities are still well preserved, such as theater which still has kóilon (cavea) with some 3000 seats, and skené (stage) that are both made of local stone entirely hand carved. All around the perimeter of cavea are still standing former farmhouses built lately.

There's still Vomitorium, too, the corridor through which crowd could exit heading the city at the end of the show, that's plenty of gravestones and remains of capitals and columns hanging on walls.

Between Forum and road, can be found ruins at the place where Palaestra had been. To the souther side of Forum we find marble floorings, ruins of few houses, a mill with two pools, pieces of town walls and fountain of the Griffin.

Not too far from the city, two Mausoleii are still standing, one devoted to the Numisii and the other one to Caius Ennius Marsus.

Access is free of charge. No opening hours scheduled.

How to get to Saepinum

Campobasso is the closest train station of the National Railway service. Bus Terminal is on the opposite side of the road, in Piazza Padre Pio da Pietralcina, where you can get bus line no 30, destination Saepinum, which stops at Bivio Altilia, around 400 mt to the arhcaeological site.

Bus terminal of Campobasso is in Piazza Padre Pio da Pietralcina (near train station). Take bus line no 30, destination Saepinum, which gets Bivio Altilia, at 400 mt to the archaeological site, without any intermediate stops.

From Naples: take A16 heading Benevento and then take the exit boot at Campobasso. Continue on SP87 and finally exit at Sepino.

From Rome: take A24. Keep going on until you get exit A1/E35 to the direction of Naples and then take the exit San Vittore. Keep driving. At the crossroad Roccaraso/Campobasso/Isernia, take SS85. Continue on SS17 and then on SP82