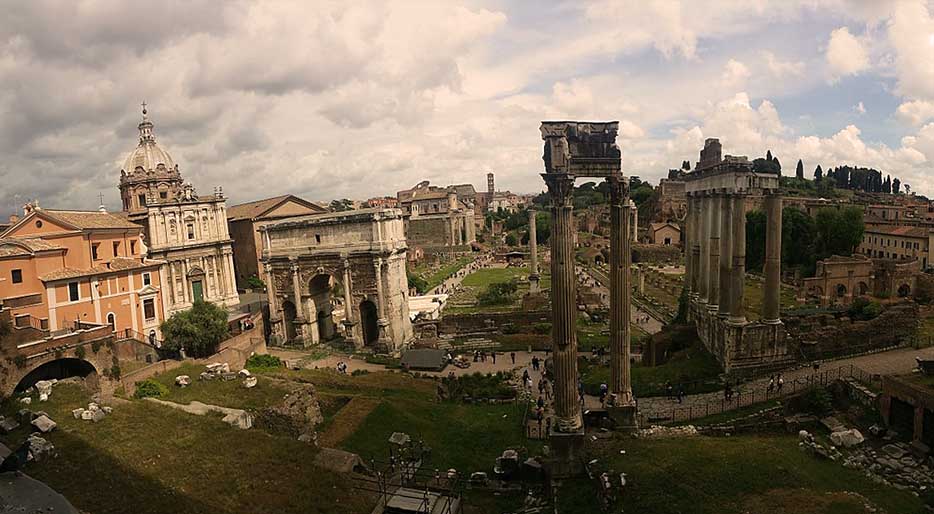 Walking down the forum in Rome it’s an amazing experience because you can almost feel the beating heart of the glorious ancient city, in this place that was the one in which the most important decisions were taken, where there were the main sacred and civil buildings. You can imagine to see the flow of all the history of Rome here, where everything started on Palatine Hill, place chosen by the first king Romulus according to the legend and even according to the archaeological proves it was here that were the first settlements of a small village that was destined to became the capital of a worldwide empire.

The hill of Palatino was the most ancient settlement in Rome according both to the legend about Romulus and Remus and the archaeological remains, and it was inhabited since VIII century B.C. In this palace were built both private houses and sacred buildings, like the one dedicated to Magna Mater Cybele that was one of the most important worship.

Since II century B.C. it becomes the residential area chosen by the aristocrats, and with the emperor Augusto it started the building of imperial palaces. The emperor wanted to connect their palaces to the place chosen by Romulus, because this choice legitimated also their presence as figures of power.

The Forum was the principal nucleus of all the most important activities in Rome, both civil and religious. All the principal historical characters of the ancient Rome, used to attend this place, and all the important decisions that permitted the development first of the roman republic and then of the empire, were taken right here.

After the fallen of the empire, the area was transformed progressively and became in the middle ages a popular residential area. The excavation became in XVIII century and continued in the XIX century soon after the unification of Italy, but it was mostly in XX century that was bring back to light all the extended area that now is visible.

The Roman Forum and the Palatine Hill are part of the largest archaeological park of the Colosseum.

The area of the forum is very wide because it includes also the extensions of the original republican nucleus of the forum made by some emperors. These parts, called imperial forum, are different and independent nucleus of buildings wanted by different emperors in successive phases of the development of the urban setting in the capital city, and they are set not necessarily so close to the original nucleus next to the Palatino. Now we concentrate our attention on this part of the forum, the one that was used also in the republican age that includes some evidences of restoration in the imperial age. The layout of the square has been changed already in the republican age, thanks to the will and the funding of Julius Cesar, that wanted a new curia to replace the old one that was damaged in a fire.

The Curia Giulia is still visible and well preserved in its structure because it was converted into a church during the middle ages and this fact permitted to the building to avoid the destruction that involved most of the pagan buildings present in this area. It is possible to see also the internal part of the Curia during the mornings of working days.

Another civil building of absolute importance, which is only partly preserved, is the basilica of Maxentius, built in the IV century A.D. that is characterized by monumental arches and vaults with fine decoration. It is possible to see part of the internal structure and perceive the rest of the perimeter of the constructions. Another symbol of the civil life in ancient Rome that you can see are the rostra, which were signs of the military power of Rome, and were positioned on a tribunes from which were made famous speeches by important public figures.

The forum included the passage of the via Sacra, one of the principal street in Rome that now is visible between piazza del Campidoglio and Colosseum. The monumental entrance of this in the part of Colosseum was the arch of Titus, built to celebrate the triumph in the campaign in Palestine, the one of the spoliation of the Temple of Jerusalem. In the area of the forum there is also another arch the one named after the emperor Septimius Severus.

The most important and well preserved temple in the forum is the one of Antonino and Faustina, built in II century. There are also the remains of other buildings that are not preserved, but many evidences found in this area are collected and visible in the Capitoline Museums, that you have to visit, also because they are positioned in a privileged location that includes inside the perimeter of the museum the fundaments of other ancient buildings related to the forum in their original position, and also the possibility to observe the forum in front of the museum, from a very particular point of view.

Between the valley of the Forum and the Circus Maximus, we find the most important of the hills of Rome, the Palatine, the hill where according to legend Romulus founded the city. This is the oldest part of the city of Rome, here we find evidence of the first Iron Age village built between the ninth and seventh centuries BC from the Latins who settled here to control the passage of the Tiber to the Tiber Island, a natural border between the Etruscan territory and that of the Latins and Sabines.

It was the seat of important city cults, including that of the Magna Mater (Cybele), and between the II and I century BC, with the expansion of the city, the hill became the residential district of the Roman aristocracy. Augusto transformed it into the seat of the imperial palaces and here his successors built even more luxurious palaces: the Domus Tiberiana, the Domus Transitoria and Domus Aurea of Nerone, the Domus Flavia. So much is the identification of the place with the luxurious houses that the term Palatium ended up by identifying the noble residences.

The direction of the Archaeological Park of the Colosseum has determined the following days with free admission and without presale:

How to get to Roman Forum

Once you get in Rome (by car or by train) it is easy to get to the Roman Forum with the public transport.  From Termini station you can get underground line B to the stop Colosseo and walk long via dei fori Imperiali to get to the entrances of the sites. Otherwise you can take bus lines Bus: n. 75, 81, 673, 175, 204; or Tram 30

Other arcaheological areas to see in Rome... 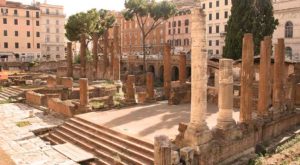 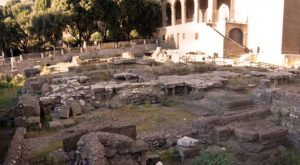 The sacred area of Sant'Omobono>>