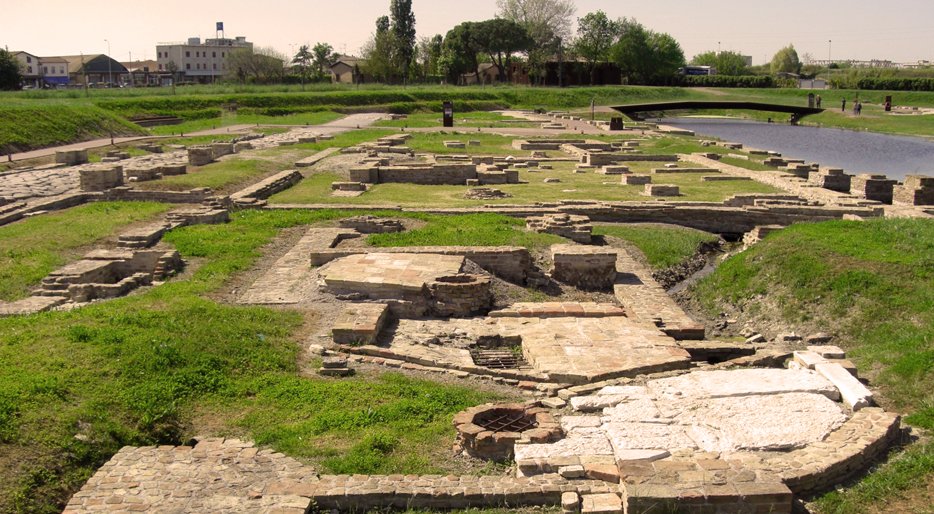 Roman port of Classe was one of the most important port for docking in the ancient world. It was at the mouth of the canal-port at about 4 km from the city of Ravenna. In the V century it was at its height right when Civitas Classis - of which Ravenna was the capital - became a main center with an access to the sea both for trading and military activities. Urban road network and building plan dating from those days are still visible.

Around 27 BC Octavianus Augustus built the military port to protect the east side of Empire by setting Roman navy close to Ravenna. He also built the canals to make the ships having access to the sea. So the town of Classe grew up between army camps and whearhouses where the marines were called "classari".

The first urban core of the town started to grow up yet from the II century but in the next two centuries the whole area became swampy due to geological phoenomena. From the beginning of the IV century a large number of facilities were out of order.

The port re-opened in the V century. It helped the revival of the small town of Classe, which became a city in the following century.

Excavations started in the XX century. They brought to light the area of port-canal with facilities, the related district, made up of commercial and industrial buildings, and finally a paved street. Itinerary spreads through around 10.000 squared meters.

It starts from Centro Visite and then goes on the paved street with ruins of basis of the ancient naval stores on both sides. Then you walk across the bridge that connected the isle quarter to the commercial trade district.

There's a free parking slot in front of the archaeological park. Itinerary has a barrier-free accessibility. It's also enriched with information boards and graphics of no-more-standing architectures overlaid to the ruins so to give an idea of how must have been the area at the time.

Hotels near Port of Classe

How to get to Port of Classe

Get railway station of Ravenna by Trenitalia line.

Line 4 or line 176 from Ravenna. Find your bus at www.startromagna.it