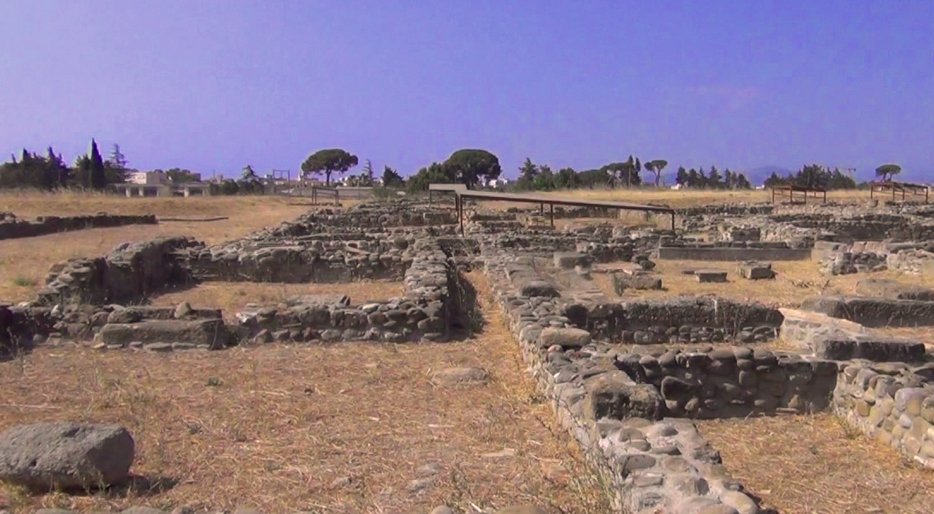 Heraclea (Herakleia) was a Greek colony rised on a hill between the mouth of rivers Agri and Simni. Some of the remains are still visible like fortifications built from row briks and few little sacred  sites.

Greek colony of Heraclea was founded by Tarentum and Thourioi in the 433 BC on the  remains of a previous Greek colony called Siris. City's political status increased so much that in the 44 BC it even hosted an important meeting of Southern populations league.

At the beginning of the war between Rome and Tarentum in the 280 BC Heraclea had  a popular victory, the so called Battle of Heraclea, when Pyrrhus took down Romans using geared  elephants.

The city joined Roman Republic confederation in the 272 BC. Heraclea tables, one of the main evidence of Magna Graecia (Greater Greece), date back to this very year.  Then the city was plundered  by popular leaders as Hannibal and Spartacus loosing its role of importance.

Acropolis was designed in orthogonal shape with insulae which are still partially visible as well as the remains of workshops used mainly to produce ceramics and religious figurines and housing districts with mosaic floors.

Sacred area stretches in the valley down the hill where evidence of Dyonisus and Demeter cult is still well preserved. There are bedrocks, religious rooms and a temple to Demeter splitted on two terraces near  the spring where fertility ceremonies were performed, according to experts.

The most impressive remains are collected in the National Museum of Siritide near archaeological site.

In the archaeological area have been brought to light the famous Heraclean Tablets, one of the major documents for the knowledge of Magna Graecia. In them we find two Greek inscriptions from the 4th century BC engraved talking about the delimitation and location of land in the sanctuaries of Dionysus and Athena.

On the other side of the plates was engraved the Latin text of the Lex Iulia Municipalis promulgated by Gaius Julius Caesar in 45 BC. and which dictated the general norms for the administrative reorganization of the city and some social norms.

The tables are now preserved in the National Archaeological Museum of Naples.

Archaeological park is open 7 days a week from  9.00 a.m. until half an hour before sunset.

Visits to archaeological site and National Museum of Siritide are included in one cumulative ticket:

How to get to Heraclea

Metaponto is the nearest station of National railway service. Take from here bus line  to Policoro. The site it's about 1,5 Km to Policoro bus station.  Bus service is under the management of SAPS Company.

From Taranto:  follow trunk road SS106 Jonica/ E90  until Policoro  then take  the road  Corso Pandosia  in direction of Via Cristoforo Colombo.

From Naples: follow A3 then E35 in direction of SS598-Fondo Valle d'Agri towards Atena Lucana.  Keep going on E35 then take exit Atena Lucana then follow  SS598  from Fondo Valle  d'Agri to  Via Cristoforo  Colombo, Policoro.