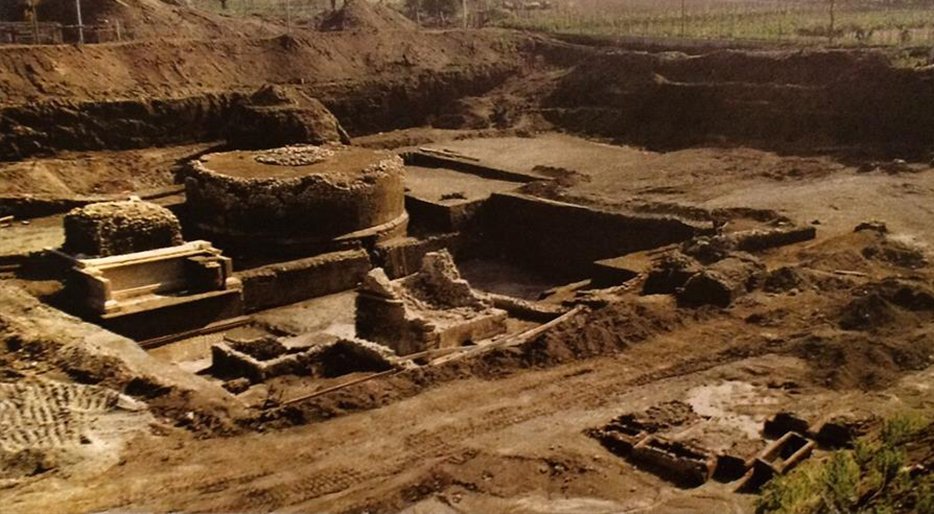 Nuceria Alfaterna is an ancient city with a thousand-year history. Considered one of the largest cities of ancient Campania, it was the capital of the Lega nucerina which included the cities of Pompeii, Herculaneum, Stabiae and Sorrento and saw its Etruscan, Samnites and Romans pass by. Today the ancient city is located in the territory of the current municipaly of Nocera Superiore.

The center of Nuceria Alfaterna develops itself in VI century B.C., when the indigenous peoples of Campania get some villages united, and built a city for strategic reasons, that was named Nuvkrinum, that means “new stronghold”. Around the same time, they have built many other cities including Pompeii.

The first phase of development of this town is related to the Etruscan, because It was one of the main cites  for them, and was part of the Dodecapolis, that was the union of the 12 most important Etruscan cities for commercial reasons.  There were also contacts with the Greeks, for economic interests and also cultural influence.

In V century B.C. the city was taken over by the Samnites, and they changed its name from Nuvkrium to Nuvkrium Alfaternum and became more and more important, because the city was head to a confederation of city in the area of Campania that included Pompeii and Ercolano. The inhabitants of Nukrium Alfaternum had their own currency and their own alphabet, and this is such a particular fact: the alphabet, called “nucerino” was based on the Greek alphabet and the Etruscan language.

After the Samnites War, the area became part of the Roman hegemony, but only in 42 B.C. the city became officially a roman colony, named Nuceria Constantia. The city preserved its identity even during the roman period, and maintained its own culture and the use of Greek language. In III century A.D. the effects of the crisis and decline of the Roman empire affected also Nuceria, but the center preserved itself from abandonment. It was controlled by the Byzantines, and in 601 A.D. the Lombards conquered the city, but even if this is the end for the ancient center of Nuceria, the area continued to be inhabited for a long time.

What you can see in Nuceria Alfaterna

There are some monuments preserved from the ancient Nuceria, in particular the “Hellenistic-Roman” theater built in II century B.C. that represent the greatest example for dimension and position of the ancient theatres in Campania.  It was built next to the city walls (that were also built in the II century B.C. and a part of them is visible, but it is included in a Medieval construction with two towers. This is because in the Middle ages the people reused the ancient walls but reinforced them).

The theatre is set on a hill, as usual for the Greek theatres and it is associated to a gym and a gymnasium.

In the Augustan age the theatre was redecorated in roman style with opus lateritium and opus incertum. In the orchestra there are decorations in polychromes marbles, and the scene had a particular structure with three recesses, and the parodos was decorated with frescos in third Pompeian style.

There are also the remains of an amphitheater, from I century B.C., included in more recent buildings, and part of baths, but in this part the excavation are still going on.

There is a wide necropolis that can be divided in three parts because of the distance of the tombs. The most important part is the necropolis of Pareti, near the theater with Etruscan and Samnites burial, and in the tombs were preserved objects of value.

Another part is more distant in the district of Taverne, the necropolis of Pizzone, and it belongs to the roman age. The sepulchers were positioned long a street and there are some relevant mausoleums of important people in the roman society. One of these mausoleums was related to the gens Numasia, and has a similar structure to the mausoleum of Augustus in Rome.

The necropolis of san Clemente has burials from the Hellenistic age and the imperial one, even from the last phase of the empire.

How to get to Nocera

From Naples it is possible to get to the archaeological site, driving on motorway A3 until the exit “Nocera Inferiore” and then proceeding on SS18 to Nocera Superiore.

From the station of Naples “Piazza Garibaldi” it is possible to take a train in direction “Salerno” and get off to the station of Nocera Superiore, and then you can walk to the archaeological site that  is 10 minutes  away from the  train station.