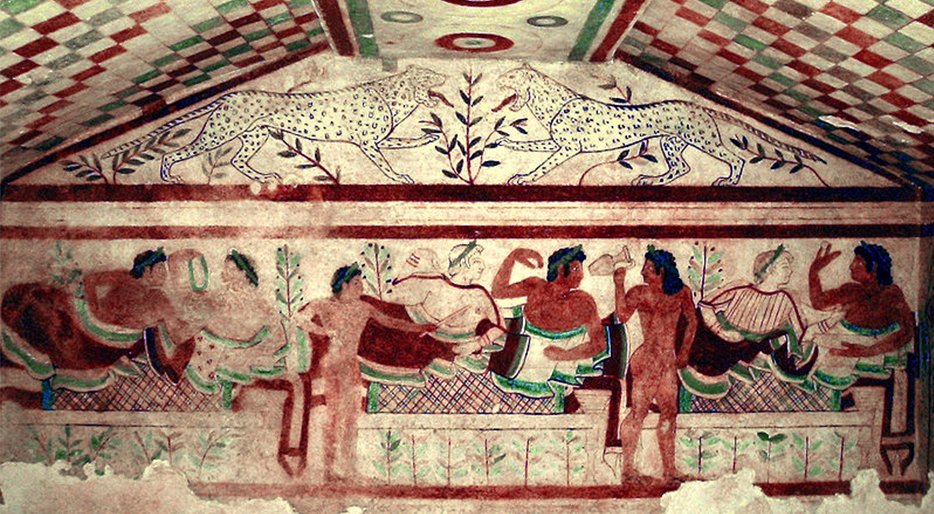 Necropolis of Tarquinia, called also Etruscan necropolis of Monterozzi, overlies on a highland to the east of the city with some 6000 tombs, many of which were covered by tumulus with chambers carved in the rock below.

The oldest ones date from VII century BC. Among thousands graves, at least 200 are decorated with a number of frescos which are the main core of the Etruscan art came to us so far and the largest evidence of ancient painting before Roman age. Together with the necropolis of Cerveteri it is one of the most important archaeological sites of the Etruscan civilization.

What you can see in Tarquina

Colors are deep and bright and the movement is hectic and it's made by fluidflowing lines. These pictorial representation had the intention to make the departed remember his/her past life on Earth and to make relatives forget the pain of losing. On the other hand decorations look like following the Etruscan people's destiny. In fact there are images which date from III century BC, close to the Etruscan civilization ending, representing devil scenes and monsters.

The most beautiful graves are the Leonesse, Guerriero, Fiorellini, Baccanti, Orco and Scudi, to name a few. Some frescos were took off from the walls to preserve them from deterioration and now collected in the National  Etruscan Museum of Tarquinia.

From 2004 Etruscan Necropolis of Tarquinia was awarded as UNESCO World Heritage status.

We suggest you to visit also the National Archaeological Museum of Tarquinia hosted by Palazzo Vitelleschi. It's one of the most important among all the Italian museums for Etruscan civilization art and relics.

With the start of winter time (from the end of October to the end of March) Necropolis is open from 8.30 am until one hour before dusk.

Close on Monday, 25 December and 1 January.

You may choose between Necropolis or Museum only. In this case the full price is € 6,00 and reduced is € 3,00.

Free entry for students under 18 and people with limited mobility.

Free entry for anyone on the first Sunday of every month.

How to get to Tarquinia

The nearest national railway station is Tarquinia’ s . The site is about 4 Km from it.

It’s possible to get Necropolis by COTRAL regional coach lines. Check the web-site to get more info about timelines, prices and routes.

From Rome: motorway A12 until Civitavecchia then keep driving on trunk road Aurelia to the exit of Tarquinia.

From Viterbo: via Vetralla and Monte Romano or via Tuscania.

Once you get Tarquinia keep following street signs of Necropolis.