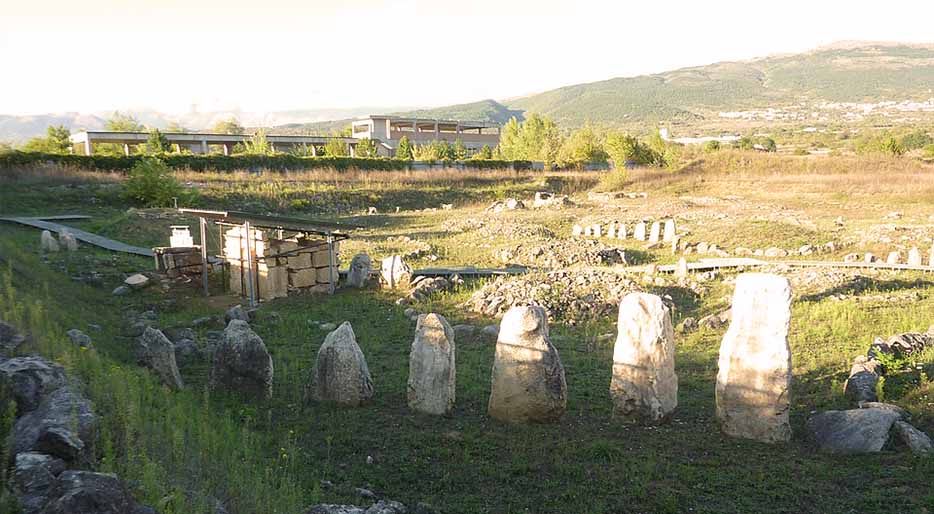 Necropolis of Fossa has a surprising eye catching dispositions of its sepulchers, that seems like a geometric pattern, because the tombs with their different shapes and dimensions are positioned in a very harmonious way. Small circular tumuli, monumental dromos tombs and menhirs, from which the area is named after “small Stonehenge of Abruzzo”, are part of the monumental necropolis that has been used for more than 1000 years and distinguish itself for the rich and fine funerary accoutrements.

The Necropolis of Fossa is situated in an area that has been certainly inhabited since IX century B.C. during the iron age, but, there are also some evidences that can be related to bronze age, when probably the zone was not already occupied with continuity.

The necropolis is particularly related to a pre-roman italic population, Vestini, indigenous of the central part of Italy between Gran Sasso and Adriatic Sea, that spoke an Osco-Umbrian language. The modern town of Fossa was built on a territory that partly correspond to the ancient city of Aveia, that was one of the most important center for the Vestini, and became part of the Roman possessions after the third Samnite war in III century.

Vestini then took part into the Social war with other italic population in order to get the roman citizenship in 90 B.C.

The archaeological remains of this area can be dated until I century B.C., but there is historical information about the city of Aveia almost until the end of the western roman empire, in III century A.D. when it became an episcopal city.

The historical records are fragmented because Aveia was not particularly relevant during the roman age, and it was not a strategic point for military purposes. Despite this fact, the area has the peculiarity of being influenced from the orient, in religious and ritual context, during the Hellenistic and imperial age, as the architecture of tombs confirms, and also other proofs as the funerary accoutrements and the discovery of a Mithraeum not far from the necropolis.

This archaeological area, that has been discovered by chance in the early ’90 during excavations for a construction project, turned out to be one of the most important ones in this area, in fact the evidences contained in it belong to a period of more than 1000 years, from IX to I century B.C.

It is one of the most monumental necropolis in the center of Italy, it is 2000 square meters wide, and is characterized by funeral peculiarities of a pre-roman population, that made this archaeological area nationally relevant, in relations to the different development phases of the necropolis: prehistorical, pre-roman, Hellenistic, and roman.

The tombs have different construction styles in relation to the age, and in the end you can have s a complete overview of the variations of artistic and sepulchral uses.

The tombs associated to the most ancient period (IX-VIII century B.C.) are tumuli signaled by a stone coverage, surrounded by a circular disposition of stones with a diameter between 8-15 meters. The tombs of the men are recognizable thanks to the presence of some menhirs in front of them, disposed in descending order from the inside out.

The necropolis is also called “small Stonehenge of Abruzzo” because of these menhirs. In these tombs has been found important funerary accoutrements composed by object of everyday use, vases, jewels that could vary in dependence of the social status of the buried people.

Then there is a phase called Orientalizing, because of the influence from oriental population but also Greeks and Etruscans in relation to the artistic style of the object in the funerary accoutrements.

This period is between VIII and VII century and the tombs kept the tumuli shape or were simple pit graves. Inside them have been found ceramics, that most of all are the evidences from which the influences in decoration styles can be detective, and also armies and fine jewels.

In the Hellenistic age the sepulchers varied for type and monumentality of architectural structures: there are in fact chamber tombs, tombs with a lithic or wooden coverage, tombstones and simple pit graves, and the structure could vary in relation to the social status of the dead.

The most impressing ones are chamber tombs, with a hypogeum structure and a dromos access. The funerary accoutrements included no longer armies but a variety of everyday use and luxuries objects, that testimony the high level of the artistic production in this period.

An example can be the funeral bed in tomb 520, that has an ivory and bone structure with carving and representations of Dionysus, Maenads and Hercules.

You may also interested in the other archaological sites of Abruzzo.

How to get to Necropolis of Fossa

By car: it is possible to get to the site from L’Aquila, through SS17

To see near necropolis of Fossa... 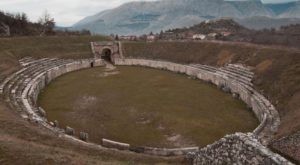 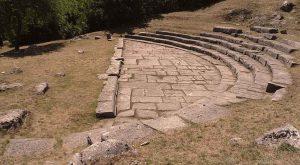