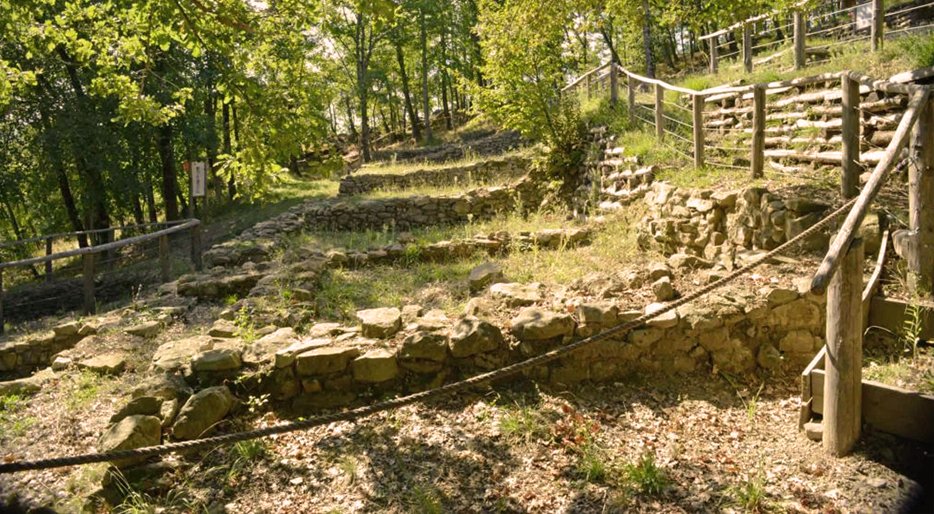 A visit to the area of Monte Bibele is a particular experience, because there is the union of the natural dimension, and the archaeological one.  It is about walking in the woods, in an uncontaminated area, where the ancient found a connection with the divinity. There are remains of sacred areas used since prehistory and there are many remains of fireplaces and ancient huts, proofs of the Etruscan civilization and of the presence of Celts in Italy.

The area of Monte Bibele was inhabited since prehistory because of the presence of the water sources. As the matter of facts the name of these places comes from Latin bibere (drink) and this etymology is related to the first purpose of the settlement.

In this place is possible to found in particular remains of prehistoric settlements, from copper age to Bronze Age and especially Iron Age.  Then Etruscan built some villages, and from 380 B.C. arrived the Celts.

It is an interesting fact that all the people who lived in this area thought that was suitable for religious worship. Monte Bibele was a sacred area in Prehistoric age, and then both Etruscan and Celts considered it a holy ground.

Eventually the area became part of the Roman hegemony, but after a fire in II century B.C., the inhabited zone was destroyed and abandoned, and so, there are not any later archaeological remains.

The area of Monte Bibele is particular because of its double characterization, naturalistic and archaeological. The archaeological remains can be found in an area that includes  the mount Bibele, mount  Tamburino e Pianella di Monte Savino.

If you want, you can reach these places by foot or by bike, following a trekking route through the woods, which leads from the municipality of Monterenzio to the archaeological area (you can found more information about this trekking route in the section “how to get to the site”).

In Monterenzio there is the Civic Archaeological Museum “L. Fantini”, where you can complete the visit of the archaeological site, and have more information, and a deeper knowledge of the area.

On Mount Bibele there are archaeological evidences from prehistoric and Etruscan age, and the most important is a sacred place named in Latin “stips” : it is a pit in the ground that maybe originally was a pool of water, where the ancient Etruscans put sacred statues as religious votes to the gods. There were found 195 bronze votive statues.

Another “stips” from the Iron age, was found on the slopes of Mount Tamburino, and in this place there is also a necropolis from the Celtic phase, composed by 170 tombs.

The funeral trousseaus were found, and they included objects for everyday life in the Afterlife, jewels, and iron army  that prove the level of militarization of the Celts’ society and the relevance given to the status of warrior. There were also other objects that revealed the social status of the people buried in the tombs.

These discoveries are very useful to compare the use of the Celts in Italy and in France, and prove that they were in contact because they have had the same evolution in military and civil costumes, even if they were in distant geographical areas.

In the area of Pianella Monte Savino  there are the remains of fireplaces and hut from Bronze Age, and a village inhabited both by Etruscan and the Celts that is related to the necropolis in mount Tamburino.

This is the area in which there are more archaeological evidences. In mount Bibere and mount Tamburino the remains are less preserved.

Reduced ticket: 3,00€ children from 6 to 14 years, school class, students of University of Bologna

How to get to Monte Bibele

From Bologna, take “Tangenziale Nord”, turn to “Complanare sud” and take Via Idice/SP7 in direction Monterenzio

From the Bus Station in Bologna, you can take Bus 918 to Monterenzio

As you arrive in Monterenzio,  the route to the Archaeological Area is different to the one to get to the museum.

How to get to the Archaeological area of Monte Bibele

By car: from Monterenzio  go on the provincial street SP7 in direction south. Go through Savazza and Bisano to get to San Benedetto del Querceto. At the crossroad turn right in direction Loiano (SP22), and get to Quinzano, then drive for 2 km and you get to the main entrance of the archaeological area.

Trekking Route by foot or by bike (3,7 km) from Monterenzio: when you see the street sign for di Quinzano, go straight ahead for 200 m, and take the first street on the left  ("via S. Giuseppe"). Having the church on your left, go on the street until "via della carrozza", for 2,8 km to the Centro Servizi ( CAI path 8032). Back to the Centro Servizi there is a path in the wood (811 m; sentiero CAI 805) that leads to the entrance of the Archaeological site, the village in Pianella di Monte Savino.

How to get to the Civic Archeological Museum “L. Fantini”: when you get to Monterenzio, the museum is in this municipality in Via del Museo 2