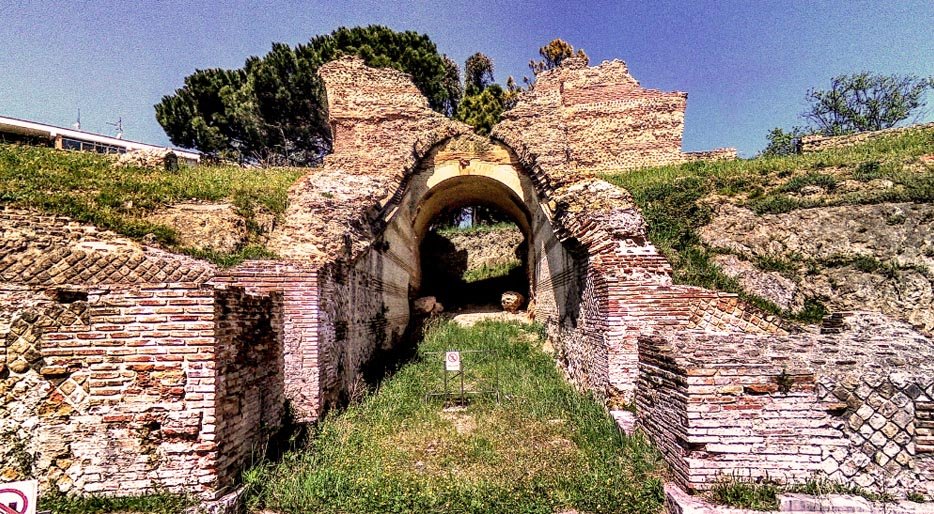 Larino is a burg in Molise that hides unsuspecting testimonies of the past, from the middle Ages and Antiquities. These fragments of history include splendid mosaics and remains of monuments, and in particular it sticks out a well preserved roman amphitheater.

The oldest remains of Larino came from Neolithic, there are some evidences from the Bronze Age and the Iron Age that prove the first phases of organized life in this area, that are very important to reconstruct the prehistorical past in Molise.

The city was founded by the Etruscan in XII century B.C. and then was inhabited by many Italian populations, because it is set in a position interested by the passage of different peoples. Larino was built in a strategic place, over the hills and not far from the sea, so that was advantaged in trades, but the whole area of Molise, was well positioned between Magna Grecia and Rome, and there was a lot of indigenous italic population in particular Osco Umbrian tribes and Samnites.

Larino in particular was inhabited by the Frentans that considered this city one of their main centers. This population was at first strongly associated to the Samnites, because of their common origin, and it had a conflictual relationship with the Romans, in particular during the Samnite’s Wars between IV and III century B.C.  but then there was a gradual Romanization.

In III century B.C. the inhabitants of Larino became allies of Rome, but they preserve their independence. In Republican Age, the city began to grow in wealth and prestige, both social and economic. In this period, Larino was particularly magnificent: there were many cultural events, spectacles, public games, and there was a strong connection with Rome, not only commercially based, but also because many important people from aristocracy and the ruling class, used to go to Larino and spend there some of their free time. At the same time, it was also affected by the events of the civil wars and the political instability of Rome in I century B.C.

Then the city kept its status of important center in the first centuries of the Imperial Age, but it started to decline in III century A.D. because of the economic crisis, and after that it lost its autonomy and was destroyed by the continuous lootings by barbaric populations.

The archaeological area of Larino

The archaeological remains in Larino are positioned in two main areas, not far away from each other, and these are recognizable because of the presence of the amphitheater and the forum.

The amphitheater is certainly the most important monument of roman Larimum. It was built in I century A.D. and its structure as arena is well recognizable. The construction has a particular history because it was built in an area that previously was inhabited and so the roman had to reorganize completely the zone to create space for the monumental building, and also because it wasn’t easy to construct on an irregular soil. This is why the amphitheater was partly excavated and partly built with a construction in stone, and did not exploit the natural slope as it was a theatre, because the roman amphitheater required this kind of artificial structure. It is possible to see well the cavea that preserve some of the steps, some vomitoria and part of the arches.

Next to the Amphitheatre there were the baths that originally were rich of opulent decoration, mosaics that represents marine subjects or animals or geometric patterns. These mosaics are partly visible today, and are integrated in the pavements of the baths.  The pools of calidarium and frigidarium are preserved, but the particularity of these baths is the presence of part of the hypocaust, so that it is possible to understand how the roman heating system worked, both for air and water. Indeed there is the area of praefurnium, where the water was heated, and there is also a room that can be observed like a longitudinal section of the heating system of air: the floor is elevated on two columns that create a subterranean passage of hot air that circulated and heated the room from the floor.

The area of forum doesn’t preserve much of its ancient splendor, because there are a few remains of the public buildings, but there is a private domus, with an atrium in which the floor is decorated with polychromes patterns. Around the atrium were disposed the other rooms of the domus, and now it is visible only the perimeter of those. But the interesting particularity of this domus is in the internal garden, the basin of the impluvium was decorated with a mosaic of a marine scene that represents an octopus and four groupers. This mosaic is preserved in the archaeological site, but there are other mosaics found in Larino, in other domus positioned near the forum or the amphitheater, but these houses have a preservation status worse than the one with the mosaic of the octopus.

Eight mosaics were found, some of them by chromes, other polychromes with complex and fine drawings. The most important and sophisticated are three mosaics that are exposed in the civic museum of Palazzo Ducale in Larino.

The first mosaic represents a roaring lion that moves forward in a natural landscape, and it is surrounded by birds. The second one is named “mosaic of the Lupercalia” and shows the legendary scene of the she wolf feeding the baby tweens Romulus and Remus, and the third one has a naturalistic subject but is fragmentary: however it is possible to recognize well vine leaves, ivy and some bird posed inside geometrical frames.

Immagine Copyright: By The original uploader was Trocche100 at Italian Wikipedia. - Transferred from it.wikipedia to Commons., CC BY 4.0,

Extraordinary openings: during the period between May and September, the site is open also on Sundays and public holidays

How to get to Larino

From Campobasso in direction north east, take SS647 “Diramazione B Fondo Valle del Biferno”, and follow the street signs in direction Bologna/Taranto/Termoli, until the exit to SP80. Then go straight on SP80 for 6 km, and then turn right and you will find the area of the Forum. If you keep going on the main street, after a few hundred meters and turn left you will get to the Amphitheatre.

It is possible to get to Larino by bus from the auto station in Campobasso (piazza San Pio da Pietrelcina). Take the bus to Termoli for 4 stops (the ride is around 1 hour long) and the stop of Larino is 10 minutes away by foot from the archeological site.