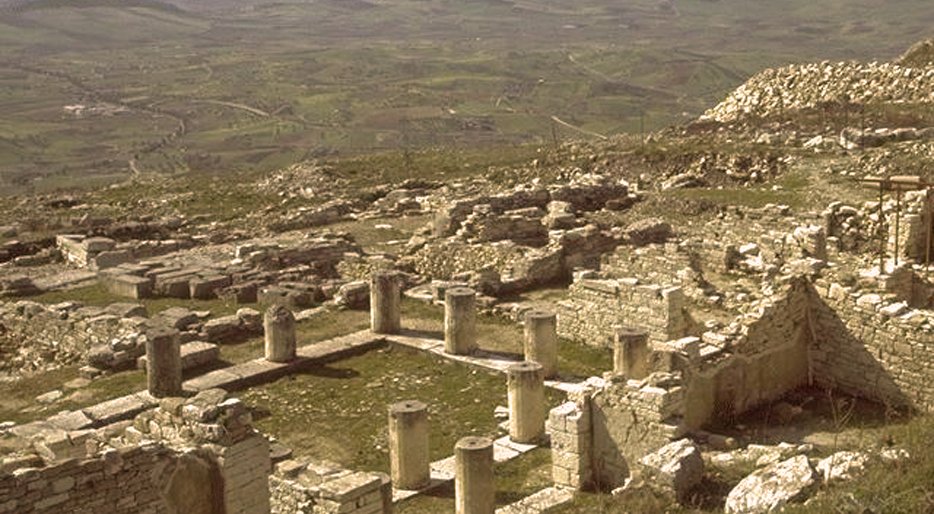 Iaitas (latin "Ietas") was an ancient town in the beautiful upper valley of Jato. Ruins can be found right on top of Monte Iato (852 m above sea level) that looks over the whole valley.

The first settlement dates back to the I millennium, built probably by the natives Elymians. It was hellenized in the VI century and then conquered by Pyrrhus and Ietines. When Carthaginians got kicked out, they surrendered to Romans.

It became civitas decumana and one of the 50 greatest cities of Sicily at the time. Later it got involved in a large number of historical and political issues occurred in that land. At first it was invaded by Vandals, then fell under Byzantines and finally involved in the Islamic invasion. Indeed it became the core of Muslim riots against Swabians and finally destroyed by Federico III in the XIII century.

The archaeological park of Monte Jato

The town of Iaitas rised right on the hedge of the mountain. It covered an area of around 40 hectares surrounded by steep rock faces on three sides, from north to north-west, and guarded by fortified walls from east to south.

In the Park can be found remains mainly  from the Greek period and just a few traces from the native and Roman settlements.

Itinerary starts from Antiquarium. Walking trhough the main road visitors are leaded to agorà, a large rectangular court surrounded by a pillared porch built in the IV century BC, and through the porch to some public buildings.

To the west side of agorà there are remains of an Italicum temple on podium devoted to Jupiter and to the western-south side there's a Punic sanctuary with a small temple dating from Classical period. The ancient bouleutérion (congress hall) is to the northern side, while the latest bouleutérion with squared plan is settled to the western side. Agorà ended its role from the Roman Empire period and private houses were built on the spot.

Ruins of the theatre dating from the IV century BC are to north-west. It was built to look like the theatre of Dionysus in Athens. Cavea was carved in a natural slope. Fitted with 35 stone steps, it could contain up to 5.000 viewers. The scenic building, very well preserved, was decorated by four large statues (two maenads and two satyrs) associated to the cult of Dionysus and now displayed in the Antiquarium of San Cipirello.

Temple of Aphrodites can be found to the west side, plus two grand houses with peristyle. The temple is the oldest building of the city, according to inscriptions found on some libation pots. It was built in mid VI century BC on remains of natives huts. It was restored in the IV century BC and a cross wall was added. Fortification is restored as well and still in use until Middle Ages. It dates around BC 300 when a new urban plan took place. Or maybe it was built in a previuos period, according to other scolars.

Browse the guide of the Archaeological Park made by Regione Sicilia.

Ticket Office closes one hour before the closing time.

FOUNDATION: first centuries of the I millennium BC

How to get to Monte Jato

Park of Monte Iato can be reached by car from SP264 Palermo-Sciacca, junction San Cipirello and then SP102.