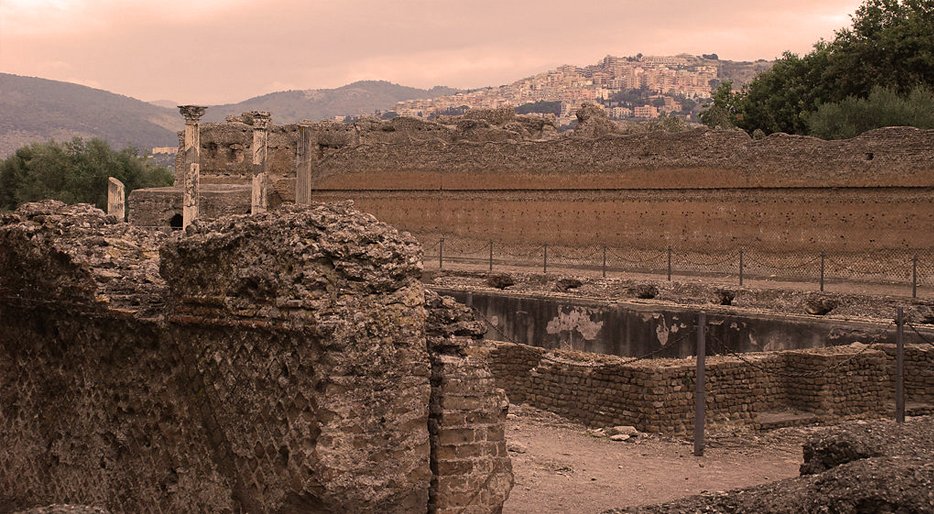 Hadrian's Villa is the largest villa ever owned by a Roman Emperor. It's a great evidence of Roman architecture in the Imperial age and it’s been acknowledged by UNESCO as a World Heritage site since 1999.

In the year 117 AD, Roman Emperor Hadrian planned a permission to build on the basement of a previous feature owned by his wife, Vibia Sabina. So it was settled the original core of the villa. It was based on Monti Tiburtini at less than 30 Km from Rome to which was linked getting through via Tiburtina and via Prenestina or even sailing through Aniene river. The area was rich in waters and was crossed by four aqueducts connected to Rome. Hot sulfurous springs can still be found nearby. They're so-called Albulae Aquae and now "Bagni di Tivoli". They were already popular at the time and very much appreciated by Hadrian.

Even if architectures are influenced by traditional design, although the villa was built with a new concept and in many different styles.The structure is composed by a series of features linked one to another: the building with three "esedre", nymphaeum stadium and the fish-farm building linked to the four sided-portico, to the small thermal baths, to the vestibule and to the praetorium pavilion. Emperor Hadrian also wanted the sites and monuments that amazed him the most while travelling, to be replicated inside his mansion.

Pecile is the four-sided-portico that surrounds a large garden with a big pool in the center and it was aimed both to winter and summer walking. Canopus is a long pool decorated by columns and statues and an artificial grotto named Serapeum, a temple topped by a dome shaped with slices.
Large and small thermal baths remains can be seen by visitors. Small baths were restricted for Emperor's family and guests. The structure was decorated with beautiful stuccos, it had an open-air frigidarium and a round room covered by a coffered dome with five large windows in origin. Large thermal baths indeed were for the Villa staff. They were provided by under-floor heating system and a wide central room used as sudatio. It's remarkable that the high cross roof is still standing even if one of the four pillars collapsed.

Other very well-preserved parts of the Villa are academy, stadium, the imperial palace, Philosophers Atrium, the Greek theatre and the Golden square, a representation building with a large decorated peristyle. Finally, the amazing Maritime Theatre, a tiny island with Ionic order columns, surrounded by an artificial canal, where Emperor Hadrian used to step back from public life to ponder.

The Archaeological Area of Hadrian’s Villa is open 7 days a week as it follows:

Ticket office closes at one hour and a half before all the closing time given above.

Closing days: January the 1st and December the 25th, except for unscheduled openings defined by MiBACT.

Free entry for everyone on the first Sunday of every month.

How to get to Villa Adriana

At Roma Termini train station take subway “B” toward Laurentina and get off at Ponte Mammolo. Now get on the bus Co.Tral to “via Prenestina”: it will stop at about 300 mt to the archaeological site.

At Roma Termini you can also get on a train to “Tivoli” and then get on CAT line bus n° 4. It’ll stop at about 300 mt to the archaeological site as well.

There are a lot of buses of line Co.Tral to get the site. You can choose to get on to both direction, Via Tiburtina or Tivoli/A24. They all stop around 1 Km to the site.