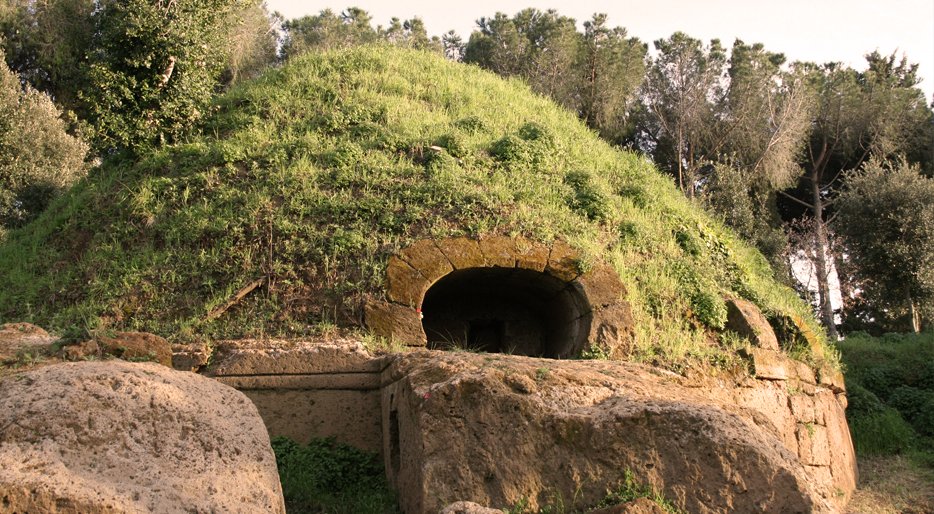 Etruscan necropolis of Cerveteri, known locally as Necropoli della Banditaccia, is the main burials’ area of the ancient Etruscan city of Caere and one of the most impressive and magnificent necropolis of all Etruria and Mediterranean basin.

It belonged to the ancient city of Caere (Cerveteri) a wealthy Etruscan city up on a tuff hill situated about 40 km from the city of Rome and not too far from the Tyrrhenian coast. The importance of Cerveteri in the history of Etruscan civilization is testified by its magnificence and a large number of findings from the burial outfits and excavations both in the areas of sanctuary and residential district.

Necropolis of Cerveteri covers an area of about two kilometers. It’s a vast burial site (around 20.000 chamber-tombs in this one necropolis according to experts) with unique features which had been worth the inclusion in UNESCO World Heritage Site list in 2004.

Stretched on a tuff plane next to the urban area, Necropolis of Cerveteri returned a large number of buildings of various kinds dating from the VII to the I century BC. In fact, we have different sectors within the graves corresponding to the quarters by which the necropolis must have been structured.

The open-access area includes the Old and New Enclosure where can be admired the circular mounds with hemispherical caps made of soil, the graves known as “a dado” (like dice) prepared in ordered sequences on straight roads and large hypogeums belonged to aristocratic families in the zone called "Del Comune" dating from IV to III century.

Another sector is locally known as “Autostrada” corresponding to the paved road that runs to Cerveteri. To its left there's the impressive Grave of the Five Chairs (third quarter of the VII century BC) so called because of the number of seats carved in tuff inside one of its rooms, which today is included in a wider monumental complex due to current excavations. To the right, in front of the Enclosure's entrance, there's another burial area with chamber-tombs and mounds of Eastern period (so called area of the "Great mounds").

The importance of the Necropolis of Cerveteri comes also by providing details about ancient Etruscans living and housing. In fact, graves are built imitating the houses where they spent their lives, with many rooms and shaped doors and windows, columns and pillars, furnishings, potteries made by precious metal and goods from the Near East and from Greece.

You really have to take this tour of the "city of the dead" and we also recommend you to visit the Cerite National Museum where a large number of Etruscan relics are collected including the famous "Sarcophagus of the Spouses".

How You get to Cerveteri

From Roma Termini take any train in direction of Pisa or Grosseto or Civitavecchia and get off at Marina di Cerveteri.

From the town of Cerveteri take any domestic line running to Necropolis. Check out detailed timetables visiting the web site of Comune di Cerveteri.

Following Motorway A1 to a southern direction. Take Roma Nord junction and get through gate 10 of the “Grande Raccordo Anulare”. Keep driving on Flaminia-Cassia. Take gate 1 to Civitavecchia and keep following to Cerveteri. Exit Cerveteri-Ladispoli and keep driving through Via Settevene Palo and then Viale Alessandro Manzoni following to Via della Necropoli.

Following Motorway A1 to Rome. Keep driving and take gate 10 of the “Grande Raccordo Anulare” towards Aurelia-Cassia. Then take exit n° 30 in the direction of Fiumicino and keep driving to Civitavecchia. Take gate Cerveteri-Ladispoli. Keep following through  Via Settevene Palo and then Viale Alessandro Manzoni towards Via della Necropoli.