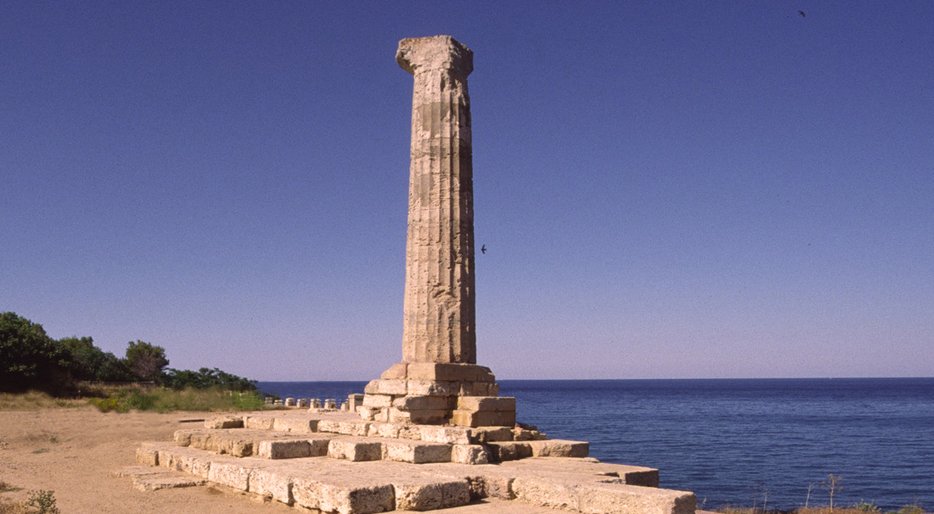 The archaeological park is placed in Capo Colonna, after which it's named, and covers an area of 50 hectares, 30 of which being intended for escavations and the remaining 20 occupied by woods and Mediterranean forest. Great Heraion Lakinion, one of the most important sacred area of Magna Graecia, rised right here with a sanctury actually devoted to goddess Hera Lacinia at its center.

The archaeological area of Capo Colonna

New Archaeological Museum, a building consisting of three wings embedded in the ground so to reduce environmental impact, is at the Park entrance. Some of the artifacts found in the dig site have been stored here. Just outside of museum there's a beautiful tree-lined promenade that leads visitors to town walls dating from the VI century BC and reinforced later by Romans.

Itinerary goes on through Via Sacra which is 8,5 mt wide and leads to the lot of Hera Lacinia' sanctuary. The zone is surrounded by large stone walls reinforced with two external towers, one to the north and one to the south, and divided into two areas looking towards east and crossed by Via Sacra. On the northern side we can look at Katagonion, a lodge for wealthy pilgrims, that feautures doric capitals dating from the second half of IV century BC and on the southern side, the Hestatorion, a building used for banquets. These two buildings are still partly unexplored.

However, temple of Hera Lacinia is the master of sights down here. Dating from the V century BC, it has a whole doric style and its feautured by a rectangular floor plan. But all that's left, unfortunately, is only one single column and ten layers of squared stone blocks forming the majestic base. Basis of another building with a large, rectangular floor plan, currently named B, were found right beside it.

Outside the sanctuary there are also few household rooms, allegedly belonged to the priests; one Roman villa and a thermal balneum, both dating from the III century AD.

Most of relics are divided among the museums of Municipality of Crotone. Keeping within the Archaeological Park, latest ones are collected in the new Archaeological Museum of Capo Colonna and some of those dating from pre-colonial period, are displayed in the Antiquarium of Torre Nao.

Besides, in the National Arhcaeological Museum of Crotone there are finds dating from  Archaic age and the famous treasure of Hera as well.

Archaeological park is open 7 days a week from 9.00 a.m. to one hour before nightfall.

How to get to Capo Colonna

Crotone is the closest station of the National Railway network and the archaeological site is at around 5 Km.

From Salerno: follow E45 in the direction of Strada Statale 19 della Calabria/SP241 at Taverna. Take the exit "Montalto U". Take SP234 and then SS107 Silana Crotonese heading to SP49, Crotone.

From Cosenza: follow SS107 Silana Crotonese/E846 heading to SS106bis, Crotone. Then go down SS106bis and keep going on heading to SP49, Crotone