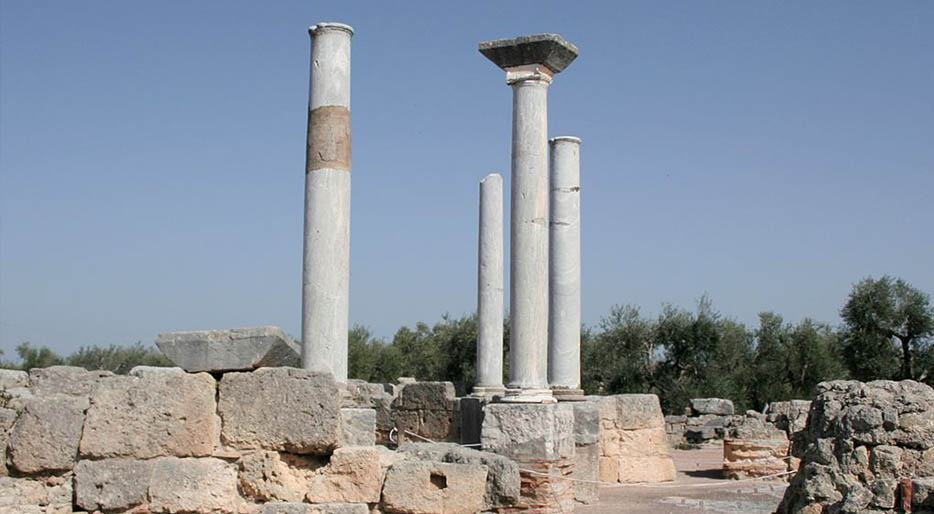 Canosa is a fascinating town and it has a story to tell that is thousand years long. In this city there are very ancient remains from prehistory, treasures from the sepulchers of the Daunians, something from the world of the ancient Greek and also the proofs of Roman power. As well as the antiquity, the city offers a wonderful view on the middle Ages, and there are many buildings from more recent periods, and so anyone of the visitors can found something interesting from the different ages.

This is one of the most important centers in southern Italy, because of the importance of its archaeological remains, and it is not structured with a single archaeological park, but the evidences can be found in different part of the city, so that you can explore them, while having a pleasant walk in Canosa.

The area of Canosa was inhabited since prehistory, at first by the indigenous population of the Daunians, and then it was interest of the Greeks to build their colonies in the southern part of Italy, that after that has been called Magna Grecia. The Greeks believed that the origins of this city were legendary, and the founder was the Homeric hero Diomedes. Under the influence of the Greeks, the town developed both culturally and civically, and the urban planning reflected the economic wealth that was typical of this center since IV century B.C., when Canosa became more important than Taranto that was the previous main city in Magna Grecia, and became a great trade center.

In 318 B.C.  the citizens of Canusium stipulated a smart and advantageous alliance with Rome, but they preserved their cultural and economic independence, and kept to use their own coin. Then Canusium fight side by side with Rome and fail in the battle of Canne in 216 B.C.

But the alliance with Rome brought prestige to Canusium, that became a municipium in I century B.C., after the Social War, and in imperial age, thanks to the emperor Antonius Pius, the city became a  colony named Colonia Aurelia Augusta Pia Canusium.

The city was reorganized also in its urban planning and grow rich of monuments and public and private construction typical of the roman cities, for example baths, temples and the evidences of them, can still be seen today.

Canusium was affected by the economic and social crisis of the empire in III century, but different from many other towns that started to decade after this moment, it resisted. Besides, it started a positive transformation and its importance grew, when it became the capital city of the Regio Apulia et Calabria that was one of the administrative regions created by the restoration of Diocletian.

In the late ancient age, it was still a prosperous center, both economically and religiously, and was in connection with the Byzantines reality, that affected the architecture of the Christian buildings. The city was involved in the Greek-Gothic (war 535-553 A.D.) and in these days was partly destroyed. Then Canusium was no long a Roman city, but became a different reality, typical of the Middle Ages. The urban setting changed and it was rebuilt around a castle, but the center maintained its importance in the area, even from the religious prospective.

What you can see in Canosa

The cultural heritage of Canosa extended itself in space and time: the evidences are not concentrated in one single archaeological area, but are positioned in different part of Canosa, and so you can walk and explore the city, and look for the points of interest to discover.

Canosa is in a part of Puglia that anciently was known as Daunia, and the most relevant evidences of these times are Hypogea. These are subterranean sepulchral buildings, reserved to the Daunian aristocracy. They were built in IV century B.C. and preserve very well their original structure, because it was very solid, and there is also some fine architectural and pictorial decoration.

From the Hellenistic phase, there are not great buildings, but there are some evidences, that are important even if they have small dimension. They are the famous vase of Canosa, well known because of their pictorial polychrome decoration that were found in sepulchral areas, and now are visible in the museum of Palazzo Sinesi. This museum is a must have in your visit in Canosa, because there are the majority of the treasures from the archaeological sites both Greek and Roman.

There is a lot from the Roman age in Canosa, and this particular case it is possible to visit two main archaeological areas: the archaeological park of San Leucio, and the one of San Giovanni.

The archaeological park of San Leucio

The park is set not so far from the build-up area, on the Hill of san Leucio, and it positioned in a natural and suggestive landscape, and it is surrounded by olive threes.

There are the remains of the biggest Paleo Christian Basilica in Puglia, with mosaic decoration on the floor, that are visible today. The Basilica was built in VI century A.D., and there is the influence of the Byzantine construction style. Before the Basilica in the same area there was a pagan temple, dedicated to Minerva Athena Ilias, from the Hellenistic age, and the capital of this temple are preserved in the Antiquarium of the archaeological park.

There was also another temple, dedicated to Juppiter Taurus, built in II century A.D. as a proof of the prestige acquired by the city when Antonius Pius made it a roman colony. It should have been a monumental construction, peripteros, with six columns in its façade and a gigantic basement, but we have only fragments of this building.

The archaeological area of San Giovanni

The archaeological area of San Giovanni is positioned in the center of the city, and it contains mostly remains from the Roman age and Late Antiquity. In particular there are the remains of a construction from the VI century known as the Baptistery of San Giovanni, and part of two Christian Basilicas. There are also some elements of the previous Roman phase, because the Baptistery was built on the ancient street Via Traiana, of which you can see some evidences and there was also a residential district, and the celebrative arch for the emperor Trajan, with a single archway and that now is preserved without the marble covering, so you can see the structure in bricks.

The Via Traiana leads out the urban center where it is visible a roman bridge across the river Ofanto that it is well preserved, but this is because the bridge was used until XX century, and so it has been rebuilt in the Middle Ages, and then restored during the time.

Last but not least there are some other Roman monuments that are not related to the two main archaeological parks.

There are two building used as baths: the Baths of Ferrara, were public and were built in II century A.D.  and there are preserved only some walls decorated in different styles opus vittatum, mixtum and reticolatum. In this baths was found a black and white mosaic, with a sea scene. The other baths are called of Lomuscium, they were private and the structure is visible, and had rooms with apses.

It has been found also a Domus, from I century A.D., decorated with frescos and mosaics that are preserved in Palazzo Sinesi .

How to get to Canosa

you can get  to Canosa di Puglia from the main cities in Italy, if you take the motorway A14 Adriatica