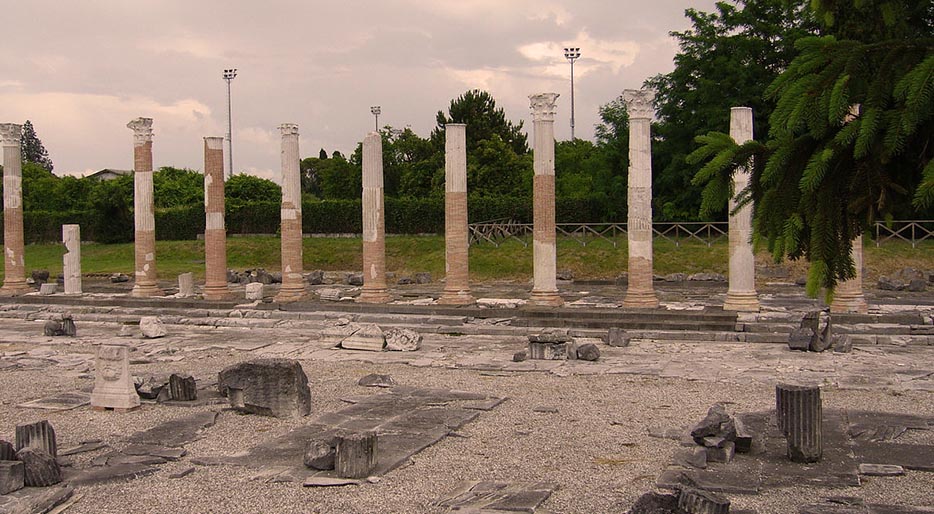 Aquileia was one of the most important cities of Roman Empire in the Mediterranean sea. Until the year 1751 it even hosted a Patriarchate and it was the core from which Christianity has been spreading in the Central Europe all along Middle Ages. It's the most important archaeological site of the North of Italy as well as Ravenna and Brescia and it was included in UNESCO World Heritage list in 1998.

Romans settled Aquileia as a military outpost against Barbarians in the year 181 BC. Later it develops into a major river trade center and becomes one of the most thriving city of the Empire. Its magnificence lasted until 452 AD when it was conquered by Unni leaded by Attila.

In the centuries to come, with the advent of Christianity Aquileia became a center of ecclesiastical organization and at the behest of Bishop Maxentius (811-838) the construction of the patriarchal Basilica was begun, completed after more than two centuries in 1031.

Standing remains prove what ancient Roman civilization must have been, even if excavations haven't uncovered the whole lot of them. Basilica is dated back to the year 1000. It's one of the most remarkable monument in the site and a unique example of religious architecture due to the mosaics dating from IV century.

Excavations revealed a section of Roman forum, dated around II to III century AD, which was the core of  the public city life as well as civic Basilica. It's partly allowed to visit macellum, thermae, mausoleum, residential developments, security walls, Roman sepolcretus, circus, amphitheater and excavations of Natissa river port fitted with warehouses and docks. Outside the city center are the Baptistery and the Patriarchal Basilica cited above.

Most of Roman and Paleochristian relics are stored into three different museums: National Archaeological Museum, Paleochristian Museum and Civic Museum of the Patriarchate.

The forum, the river port, the late antique markets, an area of the necropolis and some domus are visible outdoors. Other remains are incorporated into specific museum structures that protect the precious mosaics, including the Paleochristian Museum, the crypt of the excavations inside the Basilica, the Domus area and the Episcopal Palace.

For info on opening hours of the individual areas you can consult the site of the Archaeological Museum of Aquileia.

The archaeological site of Aquileia is partly open to the public with free admission.

Paid areas include specific rates and reductions, for more details you can consult the site of the Archaeological Museum of Aquileia.

Cervignano-Aquileia-Grado is the nearest railway station. It's about 12 miles from Museum. To get Aquileia city center take SAF bus line that stop at Cervignano railway station. Check out the timetables on SAF website.

Take A23 motorway, gate Palmanova, then follow SS 352 in a southern direction.  After you got in the city center take via Roma (it’s on the right of the main road Iulia Augusta). Right after the south side of Museum there's a free parking lot, about 500 yards to the entrance.

Transport from and to airport.