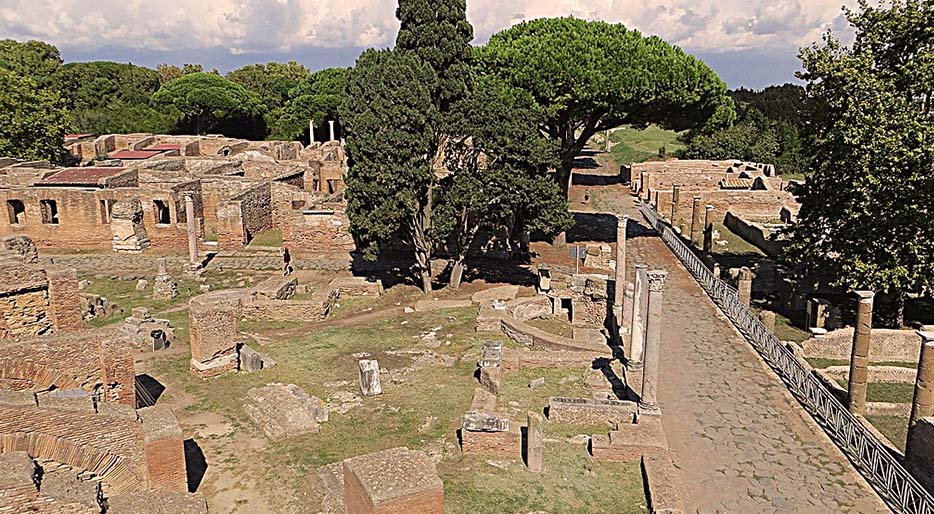 Ancient Roman colony named Ostia is one of the largest archaeological site dating back to ancient Rome, looking at the remains that can be found close to modern Ostia. Ancient traditions date its foundation to 620 BC by the hand of the fourth king of Rome, Anco Marzio, for reasons linked to the exploitation of the salt marshes placed at the mouth of the Tiber (hence the name Ostia, from ostium = mouth)

It was Rome's first colony built to be a naval base. Especially in the Imperial era it had a boom and a theatre, a forum, an aqueduct and a harbor were built up and the town turned into a major center for trading and harbour city of the ancient Rome.

The excavations of Ancient Ostia

Territory and geographical area  of Ostia Antica were pretty different from the modern land . In fact, the ancient town rised in a strategic location, close to sea coast at the mouth of the River Tiber. The oldest evidence is a fort made of tuff blocks by Roman colonists in the second half of the IV century to watch the mouth of the river and the local coastline.

Walking through perfectly preserved ruins of  Ostia Antica, makes you feel like to be in a mysterious and timeless place. We suggest to start the visit going through Decumano Massimo, the street which runs from Porta Romana to Porta Marina. You soon get into  the same web of streets, squares and districts of the ancient town. There are still signs on the walls and stunning mosaic, preserved in a few buildings.

To the northern area  there are Forum delle Corporazioni and Roman Theatre, recording the role of trading business over Imperial Ostia. There are few more attractive feautures to be seen like Thermal baths devoted to Neptune with marine theme mosaics, Basilica, Domus of Cupid and Psyche, Collegia, semi-underground Mithraeum, a tavern amazingly preserved - there's still even the counter - and  finally, apartments with frescoes called Insulae (visit-by-appointment only).

Imagine copyright: By Mister No, CC BY 3.0

The last entry is allowed one hour before closing.

The site is closed every Monday and January 1st, May 1st and December 25th.
The ticket office and the Ostiense Museum close one hour before the time shown.

Ticket cost: Full € 8 - Reduced € 4 (for citizens aged between 18 and 25 and for teachers of state schools with permanent contracts).

Admission free on the first Sunday of each month and for children under 18, we invite you to consult the site to check all conditions of gratuity.

During temporary exhibitions, the entrance ticket will be increased by € 2

It is possible to book a visit to the "Decorated Houses" which does not include any additional cost.

How to get to Ancient Ostia

BY CAR
Ostia is just a few minutes from the Grande Raccordo Anulare and from Fiumicino airport, it can be reached mainly from one of the following roads: Via del Mare, Autostrada Roma Fiumicino, Via Cristoforo Colombo. To reach Ostia Antica just follow Via del Mare to its intersection with Via Ostiense.